Olive oil has become a favorite choice among many cooks for its versatility and distinct taste. If you ever watch (or have even heard of) the popular TV cook Rachael Ray, you probably know that she is famous for using olive oil in most of her recipes. She has become so synonymous with the oil that she helped make it a popular fad, launched the abbreviation “EVOO” (for “extra virgin olive oil”) into common kitchen parlance and even markets her own brand of it. 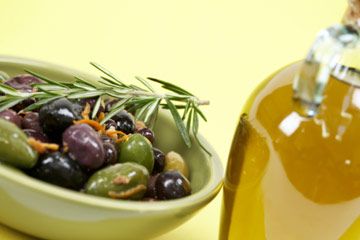 But the olive oil craze has also grown as studies continue to reveal its numerous health benefits. When researchers started looking into why people in the Mediterranean region are generally healthier and have a longer life expectancy than others, they found that this was largely a result of their healthy diet. And they believe that diet is so healthy because of their heavy consumption of olive oil.

As you might expect, this is because olive oil is nutritious in and of itself. And we’ll be talking about what researchers believe is in olive oil that makes it so healthy for us.

However, it’s important to keep in mind that olive oil is a healthy choice not only for what it is, but also for what it is not. Namely,

while olive oil is actually good for maintaining healthy cholesterol levels, many of its cooking substitutes are decidedly bad for cholesterol. This includes butter or lard or anything that is partially hydrogenated.

What’s fascinating is that people in the Mediterranean region have been reaping the benefits of olive oil for millennia, without knowing all the scientific nutrition information we know today. Olive oil was highly valued in ancient Mediterranean cultures for use in food, but also as lamp fuel and other medicinal uses. There were legends about the origin of the olive tree, and it came to represent such things as peace and fertility. We get our English word “oil” from the Romans (“oleum”), who derived it from their word for olive (“oliva”).

Although these days we can extract oil from olives with industrial machines, ancient people had to crush olives by foot or stone, or eventually with a mule-powered crushing mill. Crushed olives turn into paste, which they divided into sections and placed on discs. These discs were piled into stacks, which were squeezed together to extract the oil.

Good living
Thank you! Please check your email and confirm the newsletter subscription.